Skip to content
Spread the love
My thanks to B.C. Brown for hosting me.
Sex is as old as humanity and erotica is at least as old as human civilization.
In fact, ancient cultures were more matter-of-fact in their attitudes toward sex than modern Western society has been. According to the Greek historian Herodotus, sacred prostitution was practiced in the ancient Near East.
Ancient artifacts include nude, often very pregnant, fertility goddesses, and Greek and Roman art depicts men and women (or two men) engaged in sexual activity. Check out the wall paintings in Pompeii, for instance, or the erotic temple art found in India. The Song of Songs in the Old Testament is obviously love poetry. The Hindus had the Kama Sutra to guide them in matters of love, and the Japanese and Chinese had their pillow books.
When I decided to write a story involving The Kama Sutra of Vatsyayana, I did some research and discovered that the book is almost 2,000 years old. Written in Sanskrit, it wasn’t translated and published in English until 1883 by the famous British explorer, Sir Richard Burton. It was published it privately in 1883 by the Kama Shastra Society and distributed quietly, presumably wrapped in the proverbial brown paper. After his death, his wife burned his personal papers.
Once I’d decided to set the story in 1885, I found a copy of Burton’s translation (alas, without the modern illustrations) and started reading. It’s a fascinating mix of sexual instruction and advice on courtship, combined with quaint superstitions of the period in which it was written. In addition to listing various sexual positions, some with names like “splitting of a bamboo” and “fixing of a nail”, it also covers biting, scratching and striking, as well as “mouth congress”, i.e. oral sex, and threesomes.
“The same things can be done when several men are sitting in company with one courtezan, or when one courtezan is alone with many men. In the same way this can be done by the women of the King’s harem when they accidentally get hold of a man.”
I can’t help wondering how often the women of the king’s harem “accidentally” got hold of a man!
Hindu society of the time was patriarchal and some of the advice is ridiculous by today’s standards. People must have married very young at the time, so I suppose it’s no wonder that the advice for how the woman should behave sounds very juvenile. In one section, Vatsyayana, who was a monk, actually recommends kidnapping the prospective bride if all else fails. Something my civilized English hero would never do. He also rebels at the advice to wait ten days before consummating the marriage.
Still, some of the courtship advice is timeless. For instance: “. . . the man should do whatever the girl takes most delight in, and he should get for her whatever she may have a desire to possess.”
Evan takes that advice to heart when he buys his bride a brand new piano and plans a honeymoon in the country rather than staying in the city.
Even though he was a monk, Vatsyayana had a romantic streak: “If men and women act according to each other’s liking, their love for each other will not be lessened even in one hundred years.” 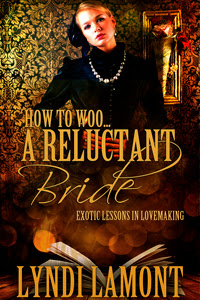 Exotic Lessons in Lovemaking
Can an ancient Hindu sex manual turn an arranged marriage into a love match?
That’s the story question posed by How To Woo… A Reluctant Bride, a steamy historical short story set in Victorian England shortly after the publication of the English translation of the Kama Sutra.
Blurb:
A marriage of convenience, nothing more…until darkly handsome Evan Channing and demure Lydia Blatchford meet. The rules are simple for an arrangement such as theirs. There should be no misunderstanding, no illusions of anything more. But the rules are about to change…
Lydia wants the kind of love and romance she reads about in books. Fortunately, she hasn’t specified which book, and Evan has a copy of Richard Burton’s new translation of the Kama Sutra, with its ancient wisdom on love and courtship. He sets out to win his high-born bride, blending seductive heat with exotic lessons in love-making.
Lydia is prepared to tolerate this man she’s been sold to, but his scorching kisses send her pulses racing. Can an arranged marriage lead to love?
(Previously published under the title Love… By the Book)
4 Angels…” a scintillating mix of lust and sexual exploration… Ms. Lamont has done a very nice job of bringing a bit of the exotic into her writing.” – Dawnie, Fallen Angel Reviews
Buy links:
Amazon: http://amzn.com/B00AM46RBK
All Romance eBooks: https://www.allromanceebooks.com/product-howtowooareluctantbride-1169381-162.html
Apple: https://itunes.apple.com/us/book/how-to-woo…-reluctant-bride/id587906118?mt=11&uo=4
BN/Nook: http://www.barnesandnoble.com/w/how-to-woo-a-reluctant-bride-lyndi-lamont/1113957630?ean=2940015722727
Kobo: http://www.kobobooks.com/ebook/How-To-Woo-Reluctant-Bride/book-W0aZtJEX9k-v9_dJ81GnqQ/page1.html?s=KhDOCZoAbUKmoVFumOotIQ&r=1
Smashwords: https://www.smashwords.com/books/view/264222
Lyndi Lamont is the racy alter ego of romance author Linda McLaughlin. Writing sexy stories gives her a license to be naughty, at least between the pages of her books! She has written several full-length novels plus numerous short stories and novellas, ranging from historical to futuristic. She believes that love is unending and universal, and enjoys transporting her readers into a different world where her characters learn that, in the journey of life, love is the sweetest reward.
Website: http://www.lyndilamont.com
Lyndi’s Love Notes: http://www.lyndilamont.com/blog
Facebook: http://www.facebook.com/LyndiLamont
Goodreads: http://www.goodreads.com/LyndiLamont
Twitter: @LyndiLamont https://twitter.com/LyndiLamont