Skip to content
Spread the love
Writers who don’t read… Suck big ol’ Matzo balls.
This past year I’ve noticed a trend in my writing; it’s dying a slow, painful death. I’m constantly finding an excuse not to write, and my writing schedule? Ha! It’s turned into “How long can I stare at the screen and pretend I’m writing when people ask how it’s going?” It’s pathetic.
Then I eureka’ed. It’s my word and I’ll use it if I fucking feel like it. In the last year I’d read (outside of a few reviews I’ve given to people who chose understandably not to have them published) maybe 8 books. 8 books?! Can you believe it? It reminded me that in my opinion – refer to first line of post – I was a matzo ball sucker.
While delicious, it was time to remedy this situation – pronto. Below is the first book I grabbed after this realization.
** 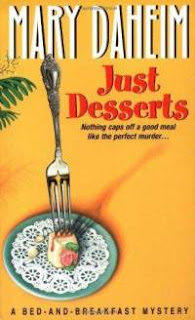 First, I am a big fan of mysteries – especially cozies. My grandmother a.k.a Goodwill provided me with a copy of Just Desserts by Mary Daheim, and I plowed right in. There are multiple reasons I enjoyed and crinkled my nose in disgust at disliked this novel. But I’m getting ahead of myself. The novel breakdown:

Judith, widow and first-time entrepreneur is trying to get her B&B off the ground, while managing an ornery elderly mother and irascible feline. When the rich and rude book a last minute weekend at her establishment, Judith’s anything-but-sedate life is further exacerbated by a theatrical fortune teller and a blatant murder in a crowded room.

The onset of this story seemed like it would be nothing more than the typical cozy mystery to settle down with. Judith, her mother, and her feline had a family dynamic often found in real life – love that borders on irritability-justified homicide. The addition of a cousin more focused on her belly than helping her family was a cute touch. The writing was fairly fluid, minus a few hiccup-y parts along the way, and the set up complete without being overdone. The addition of the Brodie clan was a frickin’ disaster little disappointing. These characters seemed flatter than an Asian hooker a bit flat, and not once could I conjure any manner of empathy with any of them. Once the mystery began the author overwhelmed the reader with a lot of the same facts and data over and over again, making the story stagnate for too long, as she tried to instill a tiny bit of romance between Judith’s former lover, now homicide detective, Joe Flynn and the entrepreneur. While I enjoyed the character of Joe, I found it a bit ludicrous implausible that he’d rely so heavily on the instinct and gumshoeing of a woman he hasn’t seen or heard from in more than twenty years. Also the author’s heavy-handed attempt to make every single person in the house a potential suspect was eye-rolling a bit extreme. Two or three suspects would have more than sufficed.

Only the banter-y well-written dialogue, very true to how people speak to each other in real life, saved me from the onslaught of possible motives and fragments of background information pertaining to each suspect. I can often overlook much in a story by loving the manner in which the author presents dialogue. But even it did not lessen the predictable nature and set up of the killer’s reveal and subsequent confrontation scene with the heroine, Judith.

My rating system is as follows: 0=hated it, 1=disliked it, 2=okay but not for me, 3=enjoyed it, 4=really liked it, 5=loved it. I gave this particular read 2 1/2 Stars because, while there were aspects I liked about it, there were others that pulled me away from truly becoming immersed in what could have been a great cozy mystery.

**
No more matzo balls!
On to the next book; hope the Muse is baited; start frickin’ writing again.